Since most of the Islands’ undisturbed forest is difficult to traverse, the Woodland Trail was built to allow Park patrons an opportunity to get inside the natural landscape.  The trail is four-fifths of a mile long and can be comfortably walked.  Care was spent mapping the site and the trail to ensure that it passes through unusual or significant habitats such as that of the very rare native Cockspur tree / Erythrina velutina or a stand of Bull Thatch palms / Thrinax radiata.  The trail goes through swampy areas, dry areas, and some areas that have enough soil for larger trees such as Mahogany / Swietenia mahagoni to develop lofty canopies.   The land encompassed by the Woodland Trail makes up approximately forty acres, and is estimated to contain more than fifty percent of The Native Flora of the Cayman Islands.

The monument stone is from a local quarry; note fossil shell embedded in the rock. Behind the rock is a stand of Silver Thatch palm, the Park’s logo tree.

Where you will find the Gift Shop, Public restrooms, the Admission Desk, The Administrative Offices and Classrooms facilities.

Located directly behind the Visitor Center, this trail offers an opportunity to view Grand Cayman’s Woodland interior through a loop pathway that is almost a mile long.

A 600′ long raised boardwalk over a seasonally flooding woodland where the humidity level is ideal for epiphytes, Orchids and bromeliads. The best time of year to view their full glory is from April to June.

This is a network of sinkholes where the habitat changes dramatically from the Dry to Rainy seasons. It is the habitat in which the Smokewood tree / Erythroxylum aureolatum thrives.

Moving into a drier, rockier environment, the flora changes to display large Century Plants (Agave) and cacti. This new garden exhibit plants from different geographic regions of the world that posses Xeriphytic qualities or a low supplemental water requirement.

The Heritage Garden is intended to showcase the plants that played an important role in Cayman’s history. The displays include grounds, or areas where root crops and vegetables would be cultivated such as the Silver Thatch Palm / Coccothrinax proctorii; and the medicinal garden with the types of plants Caymanians used to treat various ailments. In the heritage vein, an old Caymanian house, circa 1900, owned by Julius Rankine from East End, Grand Cayman, was brought to the Park and restored, and a sand garden was developed around the house showing the traditional ornamental plants of that setting. There is also a collection of the traditional fruit trees like Myrcianthes fragrans a member of the Myrtle family and is locally known as “Cherry” Birds eat the bright red fruit.

You will walk a meandering path of changing colours from sunny to and shades at any time of the year. You will also encounter all kinds of colourful local butterflies.

This garden showcases over 60 species of palms and cycads set among the native woodland.

Situated and the edge of the Buttonwood Swamp, this area provides birdwatchers with the a great opportunity to view many of the Cayman Islands native birds as well as migrating species.

Features two native ferns that grow in semi-saline swamp conditions and can achieve heights of up to ten feet.

This deep sinkhole has an active spring near its surface near which native plants are slowly establishing themselves. The open water also helps encourage humidity-loving plants in the area.

The fossil bones of the Cuban Freshwater Crocodile (Crocodylus rhombifer) were discovered in this wetland. Widespread and abundant when the early mariners first visited these islands, the crocodiles now survive only in the Zapata swamplands of Cuba. Look across the bridge at the Hickatee Habitat wetland where our native freshwater turtles have found a permanent home.

Native and Caribbean doves can almost always be seen in this area if it is approached quietly.

In the midst of a majestically wooded area, an explosion of Bull Thatch Palms / Thrinax radiata creates a rare, lush vista.

The deeper soil in this area support the growth of larger trees. Important native trees are being introduced here, some of which may not otherwise be seen due to their inaccessibility or rarity. These include the Calabash (Gourd) tree, the Mastic, and the rare Terminalia eriostachya.

Along the Woodland Trail lies the Blue Iguana Habitat, which is the centre for the National Trust’s Blue Iguana Recovery Program founded in 1987, with an ultimate repopulation goal of 1000. The Habitat has become an exceptionally popular area as the captive breeding grounds for these fascinating reptiles (Cyclura lewisi) who only two decades ago were facing extinction. Frequently found freely roaming the grounds of the Park, these “blue dragons” delight both local and foreign visitors who happen upon them. Remember to see if one is not under your car before you leave the parking lot.

The Botanic Park hosts plant sales throughout the year through its on-site nursery. Requests for the propagation of plants found at the Park can also be arranged with requests taken at the Botanic Park’s Visitor’s Centre.

Plan your next trip with us with this Printable Map 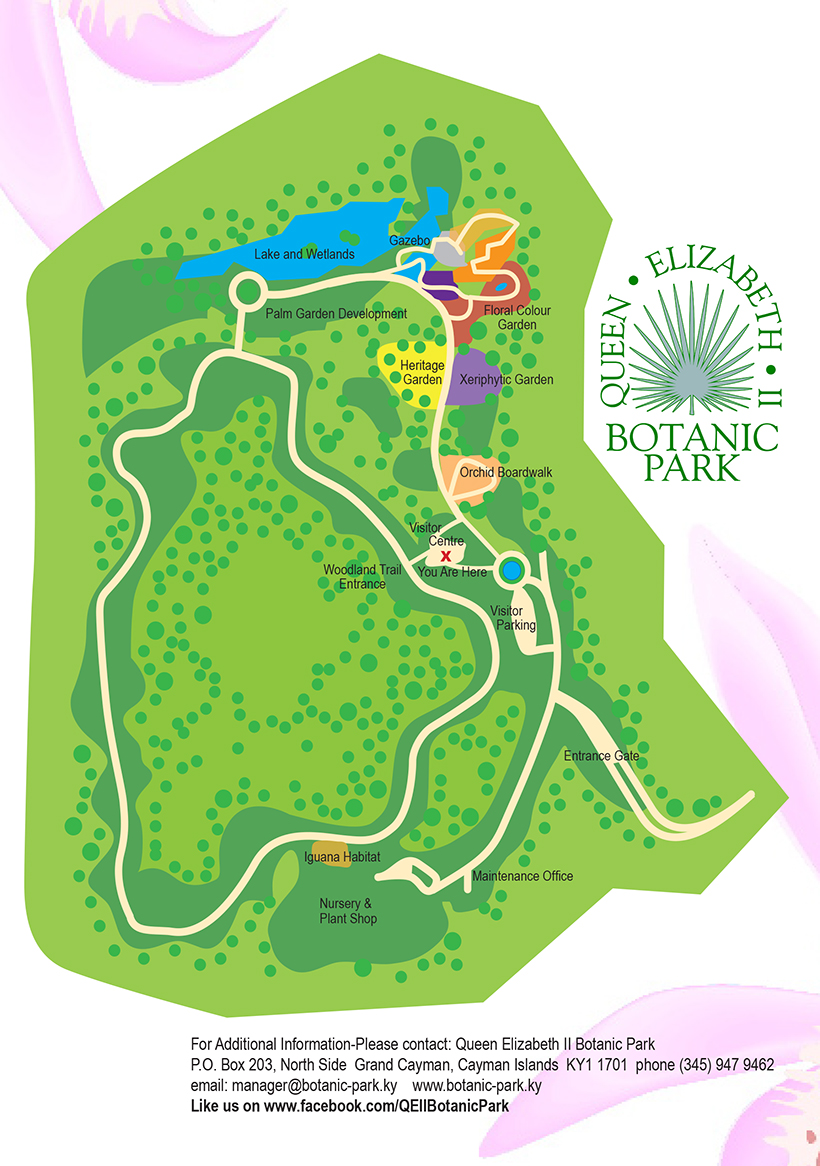