Annual Orchid Show leads to a weekend in full bloom

By: Samantha Bonham | [email protected] March, 2014
Thousands of orchids, both indigenous and exotic, were on display over the weekend for browsers to admire and to buy at the annual Orchid Show and sale.
The event at the Queen Elizabeth II Botanic Park is a joint fundraising effort between the Orchid Society and the botanic park.
Just shy of 300 orchids in all shapes and hues were displayed in a color-coordinated arrangement by Tara Tvedt, secretary of the Orchid Society.
Ms. Tvedt said it took her three days to round up the orchids and arrange them all.
“I did seven hours each day … We pulled the greenery from the nursery at the park. All the orchids are from our members at the Orchid Society,” she said.
While the display is usually of 300 flowers or more, Ms. Tvedt said there were fewer blooms exhibited this year due to the weather. “We had a little bit more rain than normal and kind of warmer temperatures, so less orchids were in bloom,” she said.
Various species of orchids were offered for sale under an outside tent, food was roasting on a smoking barbecue, and blue iguanas roamed the grounds. An exhibit of Cayman’s most treasured orchids that were carefully plucked from the gardens of private local orchid collectors was on display inside the visitors center. 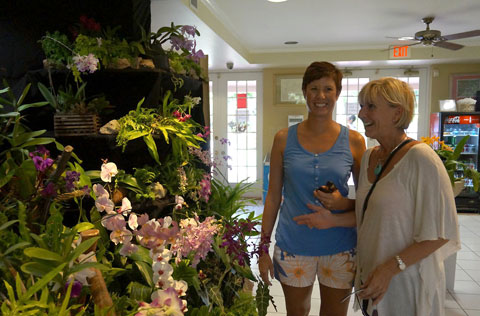 “We did it by color scheme because it’s more impactful that way,” said Ms. Tvedt. “There’s always a lot of purple and pink colors, not that many whites this year, and lots of yellow and orange.” Overall, she noted, “A lot of different species of orchids are here. I was quite proud as I got to bring a few of my own this year. This one [Vandaceous Orchid] bloomed three times this year.”
The Vandaceous orchid is a tropical species that originates from the islands of the South Pacific, according to Orchid Run’s website.
Outside on the patio, orchid workshops were held for those interested in starting their own orchid collection.
Retired Fire Chief Kirkland Nixon offered tips and gave demonstrations on how to care for orchids. His private collection boasts around 3,000 orchids, all kept in a shade house in his back yard.
“The most common question people ask is about repotting the plant,” he said. “The most critical thing about growing orchids is to know when to repot and how to repot. Most orchids don’t like to be disturbed. Unless you need to repot it, you shouldn’t.”
He added that there are only two circumstances when an orchid should be repotted – if the roots begin to rot or if the orchid outgrows the pot.
For beginners, one of the most commonly found orchids, Phalaenopsis, is the “easiest to start with,” and is sold in local supermarkets, according to Mr. Nixon.
For anyone thinking about growing an orchid from seed, the process is complex, and it may five years for the plant to grow. John Vlitos, president of the local Orchid Society, said that propagating orchids from the seed has to be done in a lab in a sterile environment.
While the Orchid Society has its own propagation unit, Mr. Vlitos said the members only grow the plants for fun and that most of the orchids at the show were imported from the U.S. and originate from all over the world.
He dispelled the notions that growing orchids is “very expensive” and that they are “hard to grow.”
Cayman is home to 26 endemic species of orchids. One of the most well known is the national flower of the Cayman Islands, the Wild Banana Orchid.
The botanic Park is also home to an Orchid Boardwalk, which features hundreds of plants.