24 May, 2007
The Cayman Islands Orchid Society opened its newly constructed Orchid Shade House at the Queen Elizabeth II Botanic Park in Frank Sound recently.
Intended as a repository for indigenous orchids rescued from the wild and as a nursery for endangered orchid species propagated from seeds, the shade house forms an important component of the Darwin Initiative, a conservation programme partnered by the Royal Botanic Gardens at Kew and the Department of Environment, Cayman Islands. 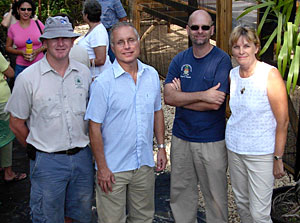 John Lawrus of the QE2 Botanic Park, David Neuschaffer of Coutts (Cayman), Dr. Mat Cottam of the Department of Environment and Sue Gibb of the Cayman Islands Orchid Society at the recent opening of the Orchid Shade House at the Queen Elizabeth II Botanic Park. Photo: Submitted

Coutts (Cayman) Ltd donated funds for the construction of the Shade House and the Botanic Park provided space for its location at their nursery.
At an opening ceremony well attended by members and friends of the Orchid Society and Department of Environment and Queen Elizabeth II Botanic Park staffers, Cayman Islands Orchid Society President Sue Gibb said that the idea of building a shade house was born out of a strong need, especially after hurricane Ivan and the rapid expansion of development on Grand Cayman, for a place to store and protect rescued and endangered local orchids.
‘These orchids, rescued from indigenous bush land cleared for development, might otherwise have been lost to us. Rescued orchids and seedling plants from our Seed Propagation Programme will be cared for at our new shade house until they can be re-established in protected areas for the benefit of all,’ she said.
After unveiling a plaque recognising his company’s contribution to the Darwin Initiative, Coutts (Cayman) Managing Director David Neuschaffer said “Coutts are proud of their continued support of the Cayman Islands Orchid Society. We recognise the importance of preserving the National Flower of the Cayman Islands and commend the good work done by the Society.’
Recent Posts
HOURS OF OPERATION